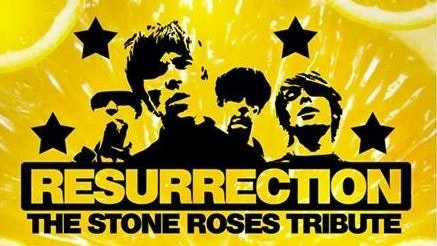 Resurrection were formed in 1998 & are based in Glasgow, Scotland. The most successful & first tribute to The Stone Roses north of the border & the closest band to create the recorded sound of the Roses 88-90 period when the band were at their peak. Their success made them not only the best Stone Roses tribute around, but one of Scotland’s most seen bands in their first 3yrs under another title. Their success was so huge, that a Stone Roses best of album which Silvertone released (years before) charted in the top 20 album sales during Resurrection’s peak.

Resurrection have toured with many celebrities including Mani (The Stone Roses/ex Primal Scream) over a 3 year period. The band performed live onstage with their hero at the world famous King Tut’s Wah Wah Hut . The band also toured with Inspiral Carpets members & had many celebrity fans including The Stone Roses/Primal Scream/The High/Inspiral Carpets/The Smiths/The Seahorses/Shed 7 & Snow Patrol among others. Some quotes from this period in the bands history are mind blowing with Mani quoted as saying “They do the songs justice & sound better than we did before we split”. The quotes & reviews are astounding from their live performances around the UK & Ireland.

Resurrection were quoted by many (including celebrities) as the ‘best live band around.’ Pretty good going for a Stone Roses tribute act. They have performed live on BBC Ireland’s ‘The 11th Hour’ STV News & various satellite shows with a more recent interview & live performance on SKY News to coincide with the release of new Stone Roses material. The group are also mentioned in 3 books (Ian Brown – Already In Me, War & Peace & John Robb’s book The Stone Roses).

The band sold over 27 shows in the space of 12 months in 2014 after a 10yr hiatus & soon went on to perform headline shows at sold out venues all over the UK & Ireland including Barrowland Glasgow, Bowlers Exhibition Centre Manchester to over 6500 people (twice) in 2018 & many more. Not too shabby for a band that hadn’t performed in over a decade.

Regarded as the only Stone Roses tribute worth hearing & with umpteen quotes from original Stone Roses members there’s no better band creating The Roses sound.